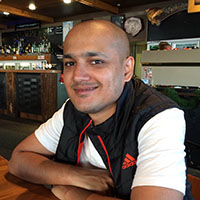 CTO Software @vamstar. 15 years in tech. Entrepreneurial with a keen interest in product development and usability. Interested in working on high impact ideas.

Are you looking for a tech advisor or a CTO?

The node event at Wipro Bengaluru sucked, is an understatement. With presenters not showing on time; to some not showing up at all. It was frustrating to travel to a node/npm branded event only to find out they were hardly involved. Very surprised they would do that. But in this age where every one wants to be an instant community and a name people should know, everything is fair game. Including short changing your attendees. Even the free booze by Wipro couldn’t help.

The consolation was the bits of new information that I did get to learn.

npm and the Node Foundation are doing a ton of work

They are doing a lot of work in promoting npm and node. Checkout the presentation by Ashley Williams.

npm goodies that I never used

Or better yet, as suggested by Ashley, alias it:

Pack and install using a tarball

Lock down for production

Out of the box security configurations and modules. Support for local and custom npm repository. And yet another framework to explore. Learn more about it at krakenjs.com

A fundamental JavaScript topic that alludes most JS developers. It was a good refresher

Some more tech and tools

At the very end, Wipro decided they needed to vomit all they were doing in open source to promote themselves and dived into a ridiculous talk that had nothing to with node at all.

Things that they are playing with that could be worth looking into though are:

If you were at the event and want to share some feedback, would love to hear your comments.

Close to 15 years in tech; I've served as a CTO and advisor to multiple organizations. Brought close to 20 products to market. As a founding member of multiple organizations I've done everything from tech to stratgey, sales, marketing, hiring, accounting and more. Experience in a variety of technologies including but not limited to AWS, Node, React, Serverless, ElasticSearch, Groovy, Java, Typescript, Angular, Grails, PHP, Drupal, Wordpress.

Always interested in looking at new tech, strategy and ways I can add value to organizations.